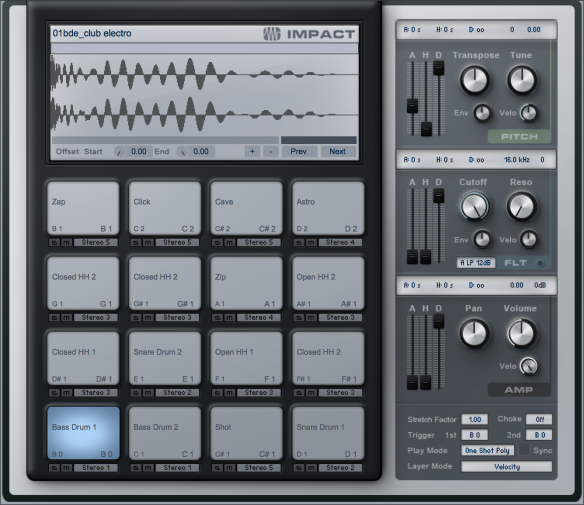 Impact features a grid of pads into which samples are loaded and played back independently, as with many popular hardware drum-sample players. Each pad has its own pitch, amplifier, and filter controls with accompanying envelopes. There are multiple stereo and mono outputs for each pad, making sophisticated output busing simple.

Impact is arranged as a 4x4 grid of pads, with controls for each pad. Below each pad are Solo and Mute controls, as well as an Output Channel assignment. Click on any pad to select it and view its parameters, located on the right side of the interface. In the lower left corner of the waveform display are Offset Start and End controls, which let you offset the playback of a sample start or end from -0.5 to 0.5 s. To the right of these controls are Add and Remove sample buttons for adding or removing a sample from the currently selected pad, as well as Previous and Next buttons to select the previous or next sample in the same file location as the existing sample.

Above these controls on the far right is a sample-zoom control, with a scrollbar to the left. Click on the Zoom control to zoom in or out on the sample, and use the scrollbar to scroll across the sample left or right if zoomed to a level where the entire sample is not viewable.

To add a sample to a pad, drag any audio clip from the Browser, or any Audio Event or selected range from the Arrange view, directly onto the desired pad. If you drag in a selected range from the Arrange view, the range is bounced to a separate audio file and then added to Impact. Dragging a sample to a pad that already contains a sample replaces the old sample with the new one, by default. To clear a pad of all samples, [Right]/[Ctrl]-click on the desired pad and select Clear Pad.

Once a sample has been added to a pad, you can trigger the sample by clicking on the pad with the mouse or by playing that pad’s assigned note on your Keyboard. There are two note assignments per pad, displayed at the bottom left and right corners of each pad. You can change the note assignment by clicking on a pad, then clicking in the Trigger 1st or 2nd fields in the lower left corner of Impact and either entering a value or playing a note on your Keyboard.

Each pad has a selectable playback mode in the lower right corner of Impact. You can choose from the following:

Note that each pad has its own Pitch, Filter, and Amplifier controls.

It is possible to add more than one sample to a pad, enabling you to trigger different samples based on velocity. For instance, you may want to have three different samples for a single snare drum pad: one soft, one medium, and one loud. This way, when you play Impact, the snare drum sounds much more realistic than if you use a single sample.

To do this, hold [Shift] when dragging a sample or clip to a pad. This adds a new layer to the pad, indicated by the bar graph in the sample display. Click-and-drag the bar graph left or right to alter the velocities at which the samples trigger. The velocity range for the currently selected sample is highlighted.

You can modify the pitch for each pad’s sample using the Pitch controls.

To adjust the amplitude for each pad, use the following parameters:

Each pad features a variable filter to allow anything from subtle tonal shaping to heavily processed filter sweeps.

Pads can be grouped so that when one pad in the group is triggered, the other pads in the group are choked, or silenced. You can add pads to one of four groups by doing the following: